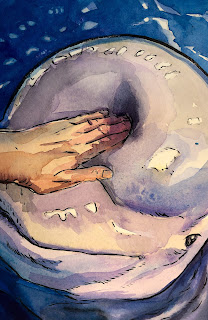 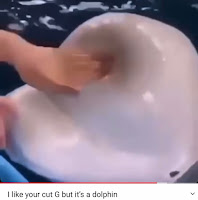 I Like Your Melon G
Inktober 2020 Day 10
The “I Like Ya Cut G” meme is one more bit of evidence that I will never really understand or truly appreciate the internet that our kids inhabit.
Like many such memes, I first heard the phrase, delivered by one son to the other, as he whacked him hard on the back of the head.
Knowyourmeme.com reports that the first video dates back to 2018 and featured a man delivering the soon to become catchphrase to a bald child before slapping him on the back of the head.
This spawned a thousand iterations, often with some sort of sound, like a shriek, or strangely, the Taco Bell noise (let’s just skip that) following the slap.
Have read the etiology of this meme, I still basically fail to understand its appeal. Yes, hitting people on the head is always funny to some, but still...why all of the iterations of this one. Surely there are other excuses for swatting people and objects?
I did find something appealing about the dolphin version of the meme. (Though of course, it is not a dolphin, it’s a Beluga whale.)
Wikipedia informs me that a Beluga whale “possesses a distinctive protuberance at the front of its head which houses an echolocation organ called the melon which in this species is large and deformable”
In other videos, Belugas seem receptive to having their melons “deformed” by a friendly human hand, so this does seem to be contrary to the basic antagonistic nature of the “I like ya cut G” meme. But maybe I like my memes less antagonist.
And maybe I just wanted to draw a Beluga.