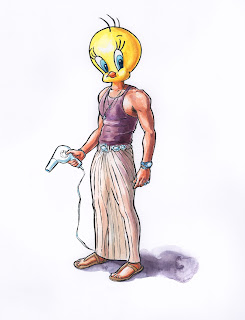 I must have seen "Shampoo" on TV in some edited form sometime after its theatrical release in 1975. While my progressive parents did take me to see "Saturday Night Fever" when I was 12, I am pretty certain that we did not see the equally R rated Shampoo when I was 8. I do, however, remember watching the movie while I was a fairly young child. I think it must have been one of the first movies I had seen with such frank sexual content, as a I clearly remember Warren Beatty playing a womanizing hairdresser who manages to have sex with several women.

What could this have to do with Tweety Bird and the Ancient Egyptian Queen of the Nile? Well, clearly, not much. Perhaps Tweety and Beatty's character, George, have a little something in common in that they both exploit a bit of gender stereotyping to their advantage. George manages to seduce women without antagonizing other men because they assume that he must be gay. Tweety, all cutesy-voiced and eyelashed, is actually male (did you know? check Wikipedia if you doubt) and is capable of some really nasty violent physical action. Yes, that comparison is a pathetic reach, and still has nothing to do with Nefertiti...

But why shouldn't a "You're So Vain" era Warren Beatty have a Tweety Bird head and a diaphanous, royal skirt?......

None of this makes any sense to my sons.  They are familiar with Tweety and Nefertiti of course, and find the inclusion of a torso of a guy in a tank top briefly amusing. Oddly enough, I think they are mostly unfamiliar with hair dryers as we don't own one. (When we all had lice a while back and needed to use a hair drier to dry the topical treatment, their father resorted to using a heat gun from his woodworking shop, nearly melting the ears off of one child.)

They did have their hair cut in a salon once a few years ago, thanks to their Grandmother's generosity.  But in that case, they hairstylist was definitely not straight, nor was he Warren Beatty.

For whatever it could possibly be worth, that this is the 22nd PuppyMonkeyBaby drawing, and the 31st character in the series.
And, no, I am unfortunately not running low on rhyming combinations....
Posted by ninalevy at 12:54 PM

Email ThisBlogThis!Share to TwitterShare to FacebookShare to Pinterest
Labels: 2015-16, Not a Napkin, PuppyMonkeyBaby Project, Watercolor