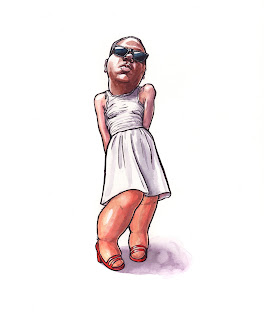 My sons had never heard of short-lived 90's rap star Biggie Smalls, nor of the 60's supermodel Twiggy.

According to Wikipedia, the Notorious B.I.G. is "consistently ranked as one of the greatest and most influential rappers of all time."

Twiggy was among the first international supermodels, was named Britain's "Woman of the Year" in 1966, and was arguably emblematic of late 20th century infatuation with unrealistically skinny, youthfully androgynous female models.

Are these people my sons should know something about? I'm not sure I successfully conveyed much beyond "Biggie is dead" and "Twiggy was skinny."

They are already familiar with Miss Piggy, but are pretty much not interested in her or in her Muppet confederates. Beyond some unavoidable enthusiasm for Elmo when they were each around the age of 2, neither has taken much to Jim Henson's progeny...with the exception of course of Yoda, if he counts. I was quite taken with The Muppet Show back during my 70's childhood. The program was on at night and combined slapsticky humor with more sophisticated entertainment. Now that there is a glut of programming specifically aimed at male juveniles available, my sons just don't have to tolerate watching singing puppets who make jokes that adults might appreciate.

And no disrespect intended to any of the three personalities involved. The rhyme was too good to pass up.
Posted by ninalevy at 2:13 PM