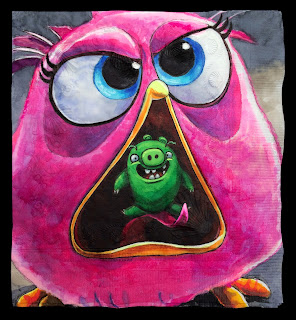 Of course there was no way I was going to escape taking the kids to see the Angry Birds movie.

It was definitely not a movie I would have seen  if I did not have children. I was bemused by the presence of unreproduced adults in the audience. They might have been in the minority, but there were definitely some at the theater.

My sons were quite pleased  with the movie. And the audience applauded as the credits rolled, which, I think, is unusual. If I were to offer my own opinion, and this is probably a place I should not go, I would say they the movie's creators have done a fine job of transforming a simplistic smartphone game app into a moderately watchable film.

My younger son's assessment, "It was like a 2 hour ad for a video game!" This was said repeatedly, with great enthusiasm and appreciation. He did not mean it as a criticism.

My older son: "I really like how they integrated the gameplay mechanics into the plot of the movie."

I had asked my younger son what should be inside the baby bird's maw, and he had suggested a pig. When I showed him the napkin, He told me that he had meant a "bloody decapitated pig's head.'

So I guess I blew that one.

The kids have been fans of the game since its release.Below is one of our napkins from early in 2012: It gives you an idea of how the napkins have changed over the years. And how my phone's camera has improved. 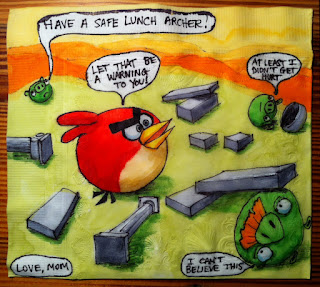