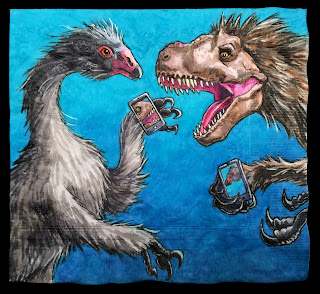 Dinosaurs are still around today.
But can they use Instagram?

While my kids have never been remarkably obsessed with dinosaurs, they have always been interested in them, and particularly appreciate a Dinosaur astronaut (see the excellent graphic novel "The Midas Flesh," or the kids books starring "Captain Raptor" for instance) or one holding a weapon or a piece of technology.

Last week I went to an after hours Instagram event, #EatDrawGram, at the exhibit "Dinosaurs Among Us" at the American Museum of Natural History.

It seemed odd to be in the museum unaccompanied by a small child, or two, or a whole second grade's worth....But it was certainly a pleasure to see the show as a solo adult. As my evening was still somewhat curtailed by the kids waiting at home, I did not get to #Eat, #Draw or #Gram while there... But, several days later, here is the drawing to be "Grammed" (could that be a word?)

The simplistic takeaway of "Dinosaurs Among Us," if it needs to be said, is that contemporary birds are dinosaurs, and that prehistoric dinosaurs were very feathery.

My sons are definitely enthusiastic about the idea of feathery dinosaurs. Although I think what they like about the two on this napkin is that they look furry. The dinos are covered in prickly protofeathers, however, and are probably not particularly fuzzy or fun to snuggle with....or able to take pictures with a smart phone.

You can see all our dinosaur themed napkins, including the Star Wars Characters Ride Dinosaurs series.

Email ThisBlogThis!Share to TwitterShare to FacebookShare to Pinterest
Labels: 2015-16, Dinosaur