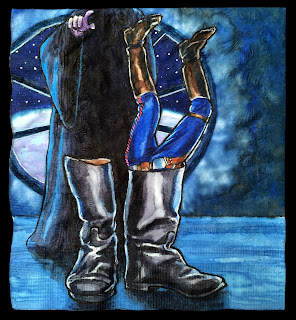 "....And I thought they smelled bad on the outside"

The recent Star Wars movie prompted the kids to get out the bin full of their old Star Wars toys.  We somehow acquired a great many action figures, way back, seven, eight, or even nine years ago, when we had the first intense infection of enthusiasm for the Expanded Universe.

In those former days of parental optimism, we were withholding the movies because they were too violent, (swords and guns!) This all makes me laugh now. We waited until the older kid was 5 1/2 before we let them see the original movie. Of course, the younger kid was 1 1/2 at the time, and was not excluded from the viewing, so you can see how patently ridiculous the situation was.

But looking at the large collection of Star Wars toys now, I can only conjecture that they were purchased in compensation for the absence of the movies. I am guessing, however, as I don't actually remember buying any of them. I'm afraid that I was not getting enough sleep back then to form permanent memories. They can't all have been delivered as gifts.

But we seem to have an astonishing amount of action figures and a good many are headless, legless, or naked. (Poor Leila and Luke)

And some are in bizarre configurations. Like the 5" Han Solo stuffed into one of the 12" Palpatine boots. I discovered later that Han is missing his head and forearms- thus his uncanny ability to fit inside footwear.

I'm not sure why this seemed like a good idea for a napkin. My younger son tells me that it would be funnier if Palpatine were  yelling, "Get out of my boot!"