Watching TV with a Giant Kitten 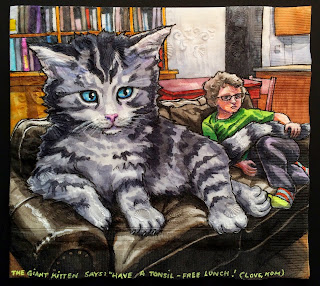 Ansel is still languishing at home, mourning the loss of his tonsils and in constant need of doses of Tylenol, sympathy and foot massage. He's been mostly parked on the couch, watching TV, and he strongly prefers to have company while viewing dreadful Disney reruns. I've gotten to the point where another 22 minutes of "Jessie" might bring on a cerebral hemorrhage, so I've been fantasizing about a cooperative and soothing pet who would placidly sit on the couch with him while he convalesces.

It seemed like a good time to make another giant pet napkin (previously a Chihuahua and a Rat)
I was also thinking of the photos from 1971 of Tippi Hedren and her family living with Neil the lion that have been circulating recently. Ansel looked at those pictures and said, "I want to live with a lion too."

I somehow managed to make the large kitten look at least as threatening as the lion. Perhaps this somehow reflects my state of mind after spending a week incarcerated in the apartment with my sons.
Posted by ninalevy at 2:13 PM

Email ThisBlogThis!Share to TwitterShare to FacebookShare to Pinterest
Labels: Ansel 2014-15, Cats, Couch (the one at our apartment), Disney, Giant House Pets, Not Trademarked