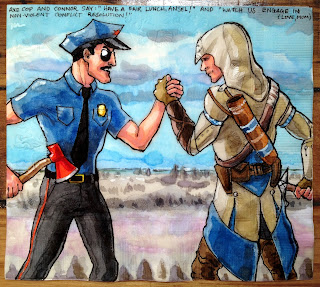 Ansel wanted these two guys on the napkins complete with their axe/tomahawk.  This was not exactly Quaker First Grade lunch material, so I moved the weapons to the edge of the image and ladled the peace rhetoric on really thick.  Archer said, "Oh come on! No one actually says that stuff at school!"

Ansel had requested that they should both be saying, "I'll chop your head off!"... (Although, perhaps not to one another- He did not specify)

I am pretty sure that saying that sort of thing is not encouraged at school.
Posted by ninalevy at 12:13 PM