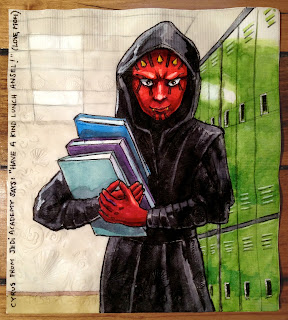 After a previous three years-long obsession, our sons now claim to be completely over the Star Wars franchise... (unless we are talking about video games of course.)

Jeffrey Brown's "Star Wars: Jedi Academy" somehow managed to get around their usual prejudice against things Star Wars.  The story of a Luke Skywalker-like underachiever who attends a Jedi Academy that is very similar to an American middle school is inventively told in a mixture of comics, journals and clippings.  The story and format appealed to both our six and ten year old sons.

Of course, what Ansel liked best, and wanted on his napkin, was the ominously hooded bully in the book, a junior Darth Maul named Cyrus.
Posted by ninalevy at 1:27 PM