Napkin Not For A Lunchbox #19 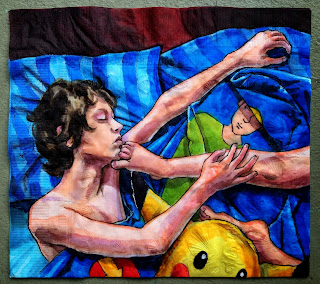 From the 24 hour series: this image is for about 11 pm at our house.

Often we have at least one holdout who is still obstinately awake until 10 pm, no matter what time he was put to bed.  Being shut in a dark room with a sleeping sibling for an hour or more is not sufficient  to induced sleep at a reasonable time.

But by 11, both kids have been out long enough to have completely rearranged themselves on the bed, and are so deeply asleep that I can turn on the light (sometimes necessary to avoid major LEGO foot injuries) and come in to check on them/ appreciate the hilarious sleeping arrangement in which they have composed themselves.

This is another image from the 24 hour series that will probably make my kids unhappy- if not now, then at some future point in time.  I was careful not to reveal their underpants in this one, but that is not going to preserve their dignity as far as they are concerned.

You can see the whole series so far at this link.
Posted by ninalevy at 12:49 PM

Email ThisBlogThis!Share to TwitterShare to FacebookShare to Pinterest
Labels: Family, Hourly Comics Images, Napkins that aren't for lunch, Not Trademarked