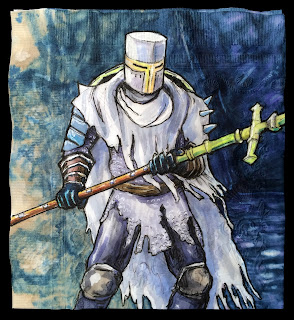 My son has a new upgraded avatar in the Dark Souls game....
and no, it is no longer this guy.  In the time that it took me to draw this one, he had moved on to a man with a head that appears to be on fire.

He told me that he liked this one because it resembled the Solaire character. (That's the buckethead doing the sun salutation from a couple of days ago)

Even worse, I now have to go remove the kid from the Xbox....(or is it remove the Xbox "from his cold dead hands?" as he would say) and force him to do his homework.  If only I had an important spear to help with this task.
Posted by ninalevy at 11:29 AM