Boba Fett Squares off with a Predator, with Godzillas 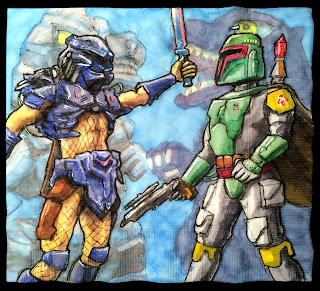 Who's ready to take on the Sarlacc?

Boba Fett is suddenly a very popular character at our house.  Of course all things Star Wars are being whipped up into froth in anticipation of the new movie opening next week. I am pretty sure that Mr. Fett, is not going to appear in the film.  Theoretically, he is still in the midst of being digested over a thousand years in the Sarlacc pit that he fell into during "Return of the Jedi."

But Boba Fett is a playable character in the Star Wars Battlefront game, and he has become our younger son's new favorite.  He chose Boba as his lead combatant when the kids staged a large action figure battle over the weekend.

His older brother chose a Predator figure as his lead. When he looked at the image on this napkin, he told me there was no way Boba was going to win the contest, even if he shot the Predator in the knee first.  I suggested that maybe they were just posing, and not actually fighting each other.

At least we know that Godzilla could deal with the Sarlacc just by stepping on it. 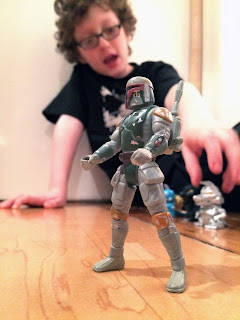