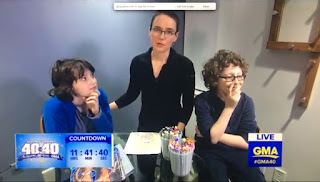 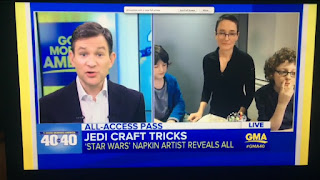 I finally got around to uploading our very grainy shot-with-an-iPhone-on-a-computer-screen video of our appearance on the 40th anniversary live stream for Good Morning America from a couple of weeks ago. My younger son wanted to be able to show it to his art teacher at school.

I was supposed to drawing a napkin live on the program, which didn't really work out. This was definitely all for the best, as having the kids talk was much more entertaining than watching me try to draw.

Unfortunately, we do not have a recording of our later appearance during the hour, during which the host Dan Harris told me that my very talkative older son might have a future in TV.  My husband, the holder of the iPhone, had to answer the door, and missed the second segment.

But I hear that this has been broadcast on actual TV since, so perhaps it is out there somewhere.

You can watch this video at this Youtube link  should you so desire.
I can't stand to view it myself unless I turn the sound off so I can't hear what I was saying and I focus exclusively on watching what the kids are doing.

Email ThisBlogThis!Share to TwitterShare to FacebookShare to Pinterest
Labels: 2015-16