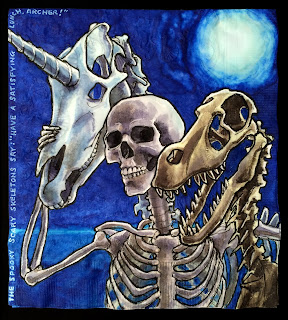 A Unicorn, a Velociraptor....and some guy....send shivers down your spine....and are really hard to draw.

As usual, I discovered that the phrase that my older son has been contantly repeating recently was not of his own manufacture, but was actually proliferating on the Internet.  My first tip-off came when one of his friends came over to, yes, play video games, and said the same phrase over and over in the same tone of voice.  (Again, I have been consistently sleep deprived for well over a decade, so it takes a lot for me to catch on.)

At any rate, "Spooky Scary Skeletons" is a 1996 song by Andrew Gold, a video of a classic Disney animation with the song that has over 5.3 million views on Youtube, some Minecraft video spin-offs, etc, etc. I am just going to say that there's a link to the "know your meme" page on the topic because I don't think I can begin to unpack all of it right now.

My son asked for unicorn, Alien and velociraptor skeletons doing a high kicking "Michigan J Frog" style dance.  I was definitely not up to the challenge.  I had a hard enough time just drawing some vaguely anatomically correct skeletons and trying to put one in front of the other.  And what does the Alien skeleton look like anyway? (No doubt the answer is available online somewhere...)

The original Disney short of the dancing skeletons is truly inspired and inspiring... and I should have done better. Maybe I will give it another shot.

My son had something more like this in mind...with skeletons. Easy, right? 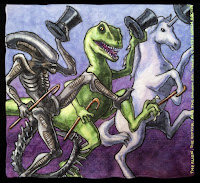