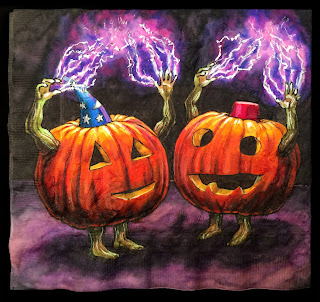 What did one Jack O Lantern say to the other?
"Cut it out."

Maybe not.  Maybe he said, "Watch out, or I am going to zap you with my lightning force powers!"

There's been a weird post-Halloween trend at our house in which the boys pretend to be pumpkins...not inert gourds, but fighting pumpkins with super powers.

It defies explanation mostly. I think it has something to do with the "pumpkin armor" and "pumpkin costume" available in the Terraria game.

I was going to draw said costume or armor, but the boys had made some pictures of their characters, and wanted me to work from their sketches. They explained that both pumpkin guys could generate force lightning and that one was wearing a wizards hat, and the other, a red fez.

My favorite moment of their pumpkin game was an instance during a sword fight where the older brother had just skewered the younger with a Nerf weapon.  The elder pronounced him dead or at least injured, but the younger replied, "No, you just stuck your sword into my cut-out eye hole. You didn't hurt me at all."

They told me that in my drawing the pumpkins were too human and not cute enough. 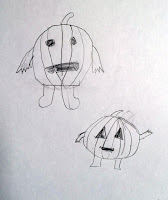