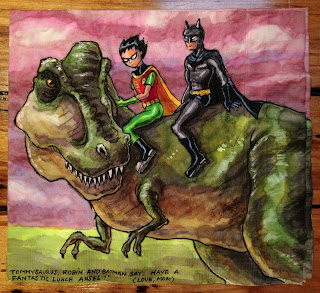 Last night, Ansel insisted we read Doug TenNapel's "Tommysaurus Rex" for the second time this week.  I think the dogs in the book might be the real draw for him (and of course the possibility that a pet dog could be reincarnated as a dinosaur)

But I was more interested in drawing the dinosaur than the dog.  Robin and Batman are riding him because someone had to, and they don't require much research.

Ansel hadn't given me a request last night, but this image almost prompted a smile this morning.
Posted by ninalevy at 12:29 PM