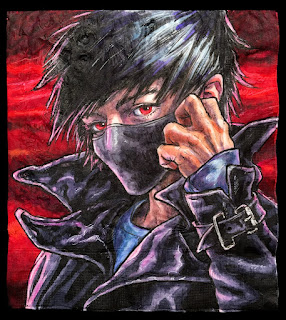 My sons are not much concerned with the concept of originality or authorship when it comes to these napkins and have often instructed me to "just copy" an image that really interests them.

Courtesy of a mixture of my klutzy drawing and misplaced hubris, I usually manage to put my own spin on the drawings that are supposed to just be copies.

My younger son specifically told me to "just exactly copy the cover image from the Nightcore Believer video" but as usual I wasn't able to leave well enough alone...and, as he would be quick to tell you, I don't do anime style very well.

But before I could even try to draw, I first had to figure out what Nightcore is. My son made the request as if it were something familiar to everyone, so perhaps I was alone in my ignorance? On the off chance that others share my lack of exposure, I will now quote Wikipedia: "A nightcore edit is a remix track that speeds up its source material, increasing its pitch."

I have to add that my kids' understanding of Nightcore is a bit more specific: for them it is a popular song that is accelerated to near chipmunk pitch and then paired with a moody anime style, minimally animated, drawing.

In this case, it is Imagine Dragons' song "Believer" which, due to my cohabitation with preadolescents, I had already heard a few more times than is healthy for my middle aged brain. But with this video, one can hear it faster, and with the benefit of the lyrics helpfully printed on screen. I had not previously realized the frequent and emphatic use of the word "pain."

I have included the original image with a bit of inspired lyrics superimposed... and a screenshot of "pain" which is thoughtfully isolated on screen when it appears, just so one should not miss it.

Click on the images if you wish to experience adolescent pain yourself.