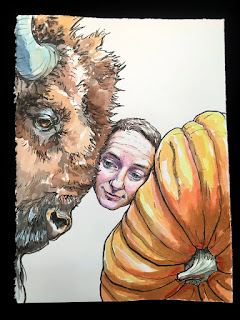 Paleo vs. Vegan?
Neither.

While it is reasonably clear that a diet of donuts and potato chips is not a boon to human health, the road gets slippery from there on out.

I was considering writing a bit about my highly unqualified thoughts on the various qualifications of dietary philosophies...but I just haven't the heart.

The whole topic and the ferocity with which people debate it makes me want to take a nap.

...Or produce a ridiculous drawing of my head sandwiched between a Bison and a giant pumpkin.


More on the topic of food.  I disliked the following drawing so much that I neglected to post it during Inktober... But in the interest of completism, here is it is with its commentary: 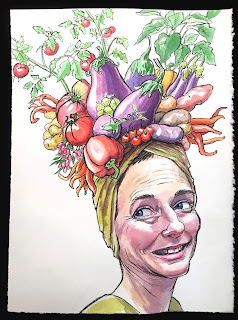 The Sad and Silly End of the Mostly All-Nightshade Diet
Or
Anything Fun on the Menu Probably Has Nightshades in it.

Of the many food categories that I had removed from my diet recently, nightshades seemed like the most obviously troublesome. There is a high correlation between autoimmunity, particularly psoriasis, and problems with nightshades.

There's lots of information out there, some of it plausible, some very unsubstantiated, about the supposedly problematic qualities of this category of plants. I can't say I have an opinion at this point, I am just playing it safe for the time being.

But before my recent health issues, I had never focused on just how much of my daily menu was made of, or at least seasoned with, nightshade vegetables. And this goes beyond the obvious staples of pizza, pasta marinara, french fries and spicy foods.

Over the summer, we had dinner with friends. They had heard that I had some health related dietary restrictions, and kindly prepared a spread of vegetarian options including: grilled eggplant, cherry tomatoes, roasted bell peppers, small potatoes...

As much as I enjoy not having a disgusting rash over a large portion of my face and body, and am happy to go without many foods to remain this way, I must admit that I do miss tomatoes, potatoes, peppers and gogi berries...

Not so much eggplants and tobacco.
Posted by ninalevy at 9:19 PM

Email ThisBlogThis!Share to TwitterShare to FacebookShare to Pinterest
Labels: Inktober 2016, Maybe You Should See a Doctor About That, Not a Napkin, Not Trademarked, Watercolor