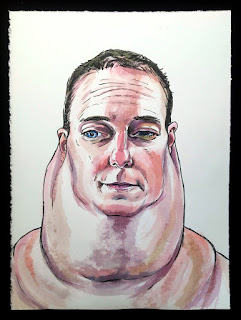 While treating my autoimmune disorder through "alternative" methods early this summer, I made some visits to the land of eating disorders. While I would like to think I was just being a tourist and not a potential resident, I did not come back entirely unaffected.

As I had never dieted before in my life, my first 5 day fast was a bit of a sneak attack on my body, and I ended up alarmingly thin.

Afterwards, I did my best to stuff myself back to a more normal size as quickly as possible. I needed to gain weight so I could  fast again, and again, in order to successfully get rid of my disgusting skin symptoms.

And no one was please to see me so thin. My family was quite alarmed, and acquaintances and strangers were peculiarly, and sometimes intensely, hostile.

While my fasting goal was about clearing the symptoms of my autoimmune condition and not about being thin, since it has changed so much over the last few months, it is still a little difficult to not be confused about what size my body should be now.

The general health benefits of intermittent fasting, and ketogenic diets are very much in the media lately, and there is a lot of conversation about "fat adaptation." Ketosis suppresses epilepsy, appears to limit inflammation and brain degeneration, and might be used to cure autoimmune disorders and cancer. One is supposed to consume so few carbohydrates, that the body "learns" how to burn fat as it does while fasting.

Despite fasting several times, I don't think my body ever learned this fat burning trick, and I can't imagine myself pulling off a ketogenic diet as it requires consuming a mere 10% of calories from carbohydrates and a remarkable 70% from fat. Supposedly after one is fat adapted, or "in ketosis" one can go long periods without food while not becoming weak or tired...or cranky. The metabolism is more efficient, and, ironically, less likely to retain unhealthy fat.

To all of this, I say ha, ha, ha. While definitely not "fat adapted," after being starved a few times, my body is now much better adapted to holding on to fat.
Posted by ninalevy at 5:47 PM

Email ThisBlogThis!Share to TwitterShare to FacebookShare to Pinterest
Labels: Inktober 2016, Maybe You Should See a Doctor About That, Not a Napkin, Not Trademarked, Self Portraits, sort of, Watercolor