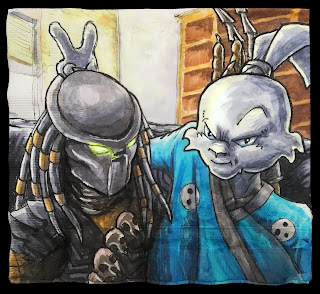 The latest three issue series of Usagi Yojimbo, Stan Sakai's long running Rabbit Ronin comic featured a bad guy wielding Predator-like claws. This was of course very exciting to the kids at our house.  They were big Usagi fans in past years.  We have every one of the various paperback compilations. And there are many.  Usagi was somewhat out of favor for a while, and I even started to consider letting our subscription to the comic lapse.

He seems to be popular again, however, even if there wasn't a really Predator in feudal Japan.  I am relieved, as I enjoy the series myself.

Usagi has fought aliens and has had crossover issues with the Teenage Mutant Ninja Turtles, so the appearance of aliens with blades in the comic is not totally out of the question.
Posted by ninalevy at 5:58 PM