The Fruit Viking is Grateful 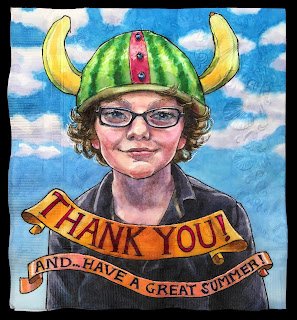 No child was made sticky during the drawing of this napkin.

It's that time again....
The end of the school year has arrived and there are people to whom we cannot possibly express enough appreciation....
The solution once again is a clumsy portrait of the kid on a napkin and some pretentious chocolate bars.

Astoundingly, my son was not offended by this drawing. He usually objects to any drawing that I do of him because there is always something wrong with the likeness. But not this time. I am perplexed.

He himself requested the watermelon helmet. His school mascot is supposedly a Viking, although I was unable to find any associated imagery associated online. While aimlessly Googling for Viking pictures, we came across the fruit helmet as a display if not an actual wearable. (But there are plenty of people actually wearing them...)

While we did purchase a large, and rather mediocre, watermelon at Cosco over the weekend, no rind helmets were actually worn during the production of this napkin.

What the kids really wanted to do with the melon was smash it with a sledgehammer, or make it  explode using rubber bands.