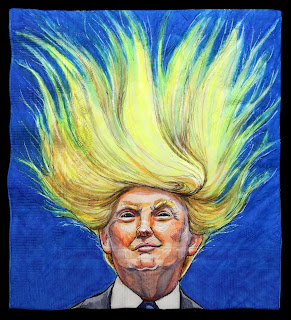 According to Wikipedia, Troll dolls were one of the biggest toy fads in the United States from 1963-65.  This was, remarkably enough, before my time. But these Trolls were around everywhere during my childhood... usually dirty and bedraggled and naked... They were all probably somewhere between 4 and 12 years old by then. I think it is safe to say that few  treat an old troll doll with care.

I did not like these dolls when I was a kid.  I found them disgusting and disturbing and did not understand why there were so many of them.


When you say "troll" now, most people do not think of ugly plastic dolls with excess hair.

My kids find the concept of online "trolling" to be very amusing. As does, apparently much of the population of the United States.

As a self-serious, so-called responsible adult, I find the idea of messing with things and people just for the joy of antagonism and disorder...well, annoying, if not downright dangerous.

Other people feel differently, of course. Perhaps they feel that disorder and conflict are an improvement.

My feelings about President Trump are not mild, and I find it extremely challenging to get my mind around why reasonable people would even want to watch him speak on TV, let alone elect him to be leader of the free world.

I am trying to understand, however. It is not useful...or reasonable...to dismiss a substantial part of the nation as stupid and/or crazy.

I found listening to the most recent episode of  This American Life, "The Revolution Starts at Noon" useful. The first segment was about "The Deploraball," a "party for trolls who say they memed Trump into the presidency." Self proclaimed trolls tried to explain what was positive about trolling and why it might be a compliment to call Donald Trump the "Troll in Chief."
Posted by ninalevy at 2:05 PM

Email ThisBlogThis!Share to TwitterShare to FacebookShare to Pinterest
Labels: 2016-17, Trump