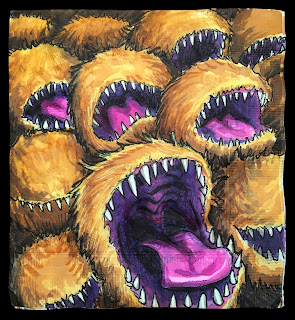 The story follows a group of kids who have survived some sort of apocalyptic event where nearly every human has been turned into a zombie and a wide range of bizarre monsters have suddenly appeared in town.

I don't remember these fanged furballs having a particular name or classification. They were just part of a wide variety within the monster population- and were drawn much more humorously and successfully by the book's illustrator Douglas Holgate.

I know it's a bit of a reach, but somehow these creatures composed only of mouths and hair seemed appropriate to me last night as we watched the 2016 election take a turn for the worse.
Posted by ninalevy at 12:34 PM