Animal Man vs. The Parasite with Black Clay 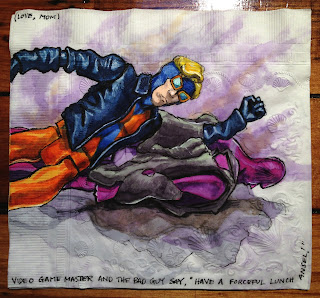 Animal Man and the Parasite star in Ansel's action figure diorama as "Video Game Master" and an unnamed purple bad guy.  I am not sure if the black Model Magic wrapped around the Parasite is a super power or a liability, but it seems likely that Animal Man has the upper hand, or fist.

Ansel felt I was shirking my napkin duty because I had not filled in a specific background.  I suggested that perhaps it was atmospheric smoke, but he still thought I had been lazy.
Posted by ninalevy at 11:08 AM